K-cups, -- the ultimate in convenience. A single serving of tea or coffee in under a minute with no waiting for the kettle to boil or the coffee to drip through -- how perfect is that? When I was first introduced to this single-serving coffee system I was totally seduced by the variety and convenience but I could never brew my k-cup of English Breakfast Tea without thinking about the waste.


The environmental impact of the pods stares you in the face each time you toss a spent k-cup in the garbage. Even before I dug up the data on this coffee craze I knew the picture wouldn’t be pretty.

Keurig single brew systems are the most popular coffee brewing gadgets on the market so billions of these spent coffee capsules are ending up in the landfill each year. A single pound of coffee sends 50 k-cups to the trash, including all of those compostable coffee grounds.


Because k-cups are made up of three parts: a plastic cup, a mesh filter and foil cap, they can’t be recycled, although the Keurig Green Mountain (the parent company and masterminds of the most popular system on the market), has now committed to making the coffee pods 100% recyclable by 2020.

In the meantime, some clever people have figured out how to make single brew systems more environmentally friendly.

The spent k-cups can be reused with the help of a My-Kap, a plastic cap that fits snugly on the k-cup. You can rinse out the coffee grounds, refill the cup with your own coffee, snap on the cap and brew away. According to Keurig Green Mountain, reusing the k-cup once cuts the carbon footprint of the system in half. Apparently you can reuse a k-cup up to 10 times.


By far the easiest eco option seems to be the My K-Cup, a reusable filter cartridge that you fill with your own ground coffee. It’s available online, at Sears, Wal-Mart and likely many more places where the brewing systems are available. 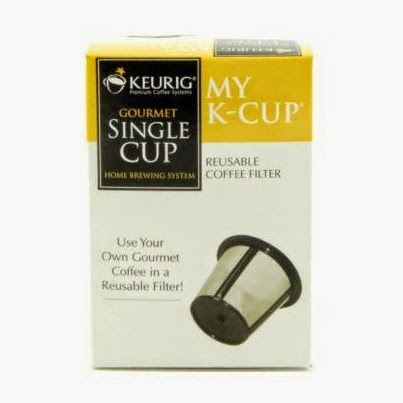 Those of us who brew our coffee and tea the traditional way could benefit from a few tips on how to make our morning brew more eco-friendly too.

According to the BBC, British households’ overfilling kettles wastes the equivalent of $126 million worth of energy each year. While there are fewer tea drinkers in Canada, more water than is necessary is often boiled for a cup of tea. Much of a pot of coffee can go down the drain.
These are easy fixes: put less water in the kettle and only brew as much coffee as you’re going to drink.


As for the k-cups, there is likely no going back once you have one so exploring options for cutting its carbon footprint is worth thinking about.

Posted by Bridget Oland at 4:00 PM

Email ThisBlogThis!Share to TwitterShare to FacebookShare to Pinterest
Labels: green living tips, In the kitchen, Packaging

The complete blogs are really inconceivable and definitely everyone will share this information.
best electric can opener

Interesting Article. Hoping that you will continue posting an article having a useful information. Organic Tea Pods