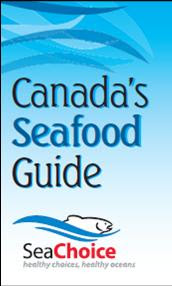 We’re a family that loves fish and seafood, which is great for a few reasons: It’s tasty, quick and easy to prepare and loaded with things that are good for you. But there are things about fish and seafood that aren’t so great.

There was a time when we’d by salmon fillets in 10 pound boxes we at so much of it. But that was a few years ago, before some worrisome information about salmon farming came to light. There have been many issues with fish farming, but the one that stuck with me is the fact that most farmed Atlantic salmon has up to seven times more PCB’s than wild Pacific salmon, due to contaminants in fishmeal they’re fed. (There are many studies that document this fact so don’t think that environmentalists are hanging onto one old study.) And one more thing, the pink flesh of farmed salmon is thanks to a dye in the fishmeal, since the flesh of farmed salmon is naturally grey.

There are many benefits to eating salmon, namely the abundance of omega 3 fatty acids in the flesh. But I don’t think that outweighs the risk of PCB consumption. Plus, there are other sources of omega 3s, like sustainably-fished Pacific salmon, flax seed and chia.

Unfortunately PCB’s aren’t the only worry with fish. Mercury is another and there are several species of fish that have especially high levels of the neurotoxin. Mercury is extremely harmful to pregnant women and children and even low levels of exposure can cause developmental problems.

Because of mercury contamination Health Canada recommends that pregnant women eat fresh tuna no more than once a month. Canned tuna, as long as its light tuna (skipjack is what you want) is okay to eat weekly. Stay away from white or albacore tuna - it has three times the mercury level of light tuna. There are similar mercury alerts for Atlantic halibut, swordfish, sea bass and several others.

Health issues aside there are the worries of destructive fishing methods, over fishing, pollution and habitat destruction that are depleting fish stocks at an alarming rate.

So how do you know what fish you should be choosing? Here are a few guidelines:
• Canned salmon is usually okay. More often than not it’s sockeye or pink from Alaska, which are among the better-managed fish stocks in the U.S. They are also low in contaminants.
• Fresh water farmed fish can be a great eco option, since it’s grown in contained ponds so is less environmentally destructive. Farmed rainbow trout is a good alternative to farmed salmon. Superstore is the only place I have been able to find fresh rainbow trout.
• Frozen Alaskan pollock and salmon are healthy and eco-friendly options too. Look for them in the frozen fish section of Sobeys and Superstore.
Don’t worry about committing all of this to memory. Instead print out one of these handy wallet guides to help you navigate the grocery store. www.seachoice.org and www.seafoodwatch.org.
Posted by Bridget Oland at 8:59 PM No comments:

There are few consumables I enjoy as much as good coffee. Curled up in a cosy chair with a steaming cup of espresso is my favourite way to start the day. But don’t be lulled into thinking that coffee is as gentle on the environment as it is on me in the morning.

The environmental impact of coffee is huge and complicated. Coffee comes from far away places so in that respect it has a carbon footprint that’s larger than many things we consume. But there are other ways that coffee can have a negative impact on us, the environment and the distant lands where it’s grown.

Coffee is big business. Canadians consume more than 118 million kilograms of roasted beans each year. That’s about 4.37 kg per person (adults anyway), which is almost 10 pounds of beans a year. I actually consume more than that, so I want to make sure that every cup I drink is as green as possible.

It used to be that most coffee was grown under a canopy of trees using few pesticides and no synthetic fertilizers. Coffee was a crop that actually helped with habitat preservation for migratory birds and other wildlife. But to feed the world’s appetite for coffee many farmers have swapped their traditional farming practices for harsher, higher yield methods – like clear cutting for sun-grown coffee, heavy use of pesticides and a dependence on petroleum-based fertilizers. (This is the coffee you get when you buy the big brands at the grocery store or when you stop by a large chain coffee shop.) As you can imagine this coffee has taken a toll on the environment and on workers’ health. Not to mention the fact that workers often don’t get paid a living wage either.

Brewing coffee from pesticide-laden beans picked by near-slave labour isn’t the way I want to start my day. And you don’t have to either. There is a handful of local shops selling coffee that is good in every sense of the word.

• Just Us! is a brand of coffee carried at both Sobeys and Superstore. Their coffee is organic and fair trade as well, meaning that the coffee farmers get paid a fair wage for their beans. (Fair Trade certified grower cooperatives also encourage more sustainable farming practices, support community development projects and ban the use of the most toxic pesticides. So even if they’re not organic chances are they’re not as bad as regular grocery store coffee). Look for Just Us! in the natural food section.

• Java Moose has some organic blends and also buys many of their beans directly from growers, so while it isn’t fair trade certified the farmers do get a fair price for their beans because there is no middle man.

• Bikes and Beans has great coffee too, some of it organic, some fair trade and some farmer-direct.

Whether you brew your own at home or stop by a coffee shop to grab your morning fix (or both), it can be easy to enjoy a greener coffee. Don’t forget to bring your own cup.
Posted by Bridget Oland at 6:19 PM 1 comment: