What’s the carbon footprint of your supper? 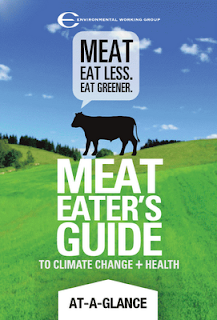 While we’re still in the midst of barbecue season consider this: a four-person family skipping steak once per week is, environmentally speaking, equivalent to taking your car off the road for three months. This is one of the findings of a new report on the environmental impact of meat and other foods, released last month by Environmental Working Group (EWG), a research organization based in the .

Weighing the environmental impact of food isn’t a common consideration when deciding what, and what not, to eat. More often it’s how healthy a food is or isn’t that helps us decide. The great thing about this new report, titled Meat Eater’s Guide to Climate Change and Health, is that it combines the two: the health and environmental impacts of common foods.

In the report EWG analyzed the greenhouse gas emissions, environmental footprint and health impacts of 20 types of food – mostly animal and vegetable protein - and came up with a summary of best-to-worst which they have packaged into a helpful guide for choosing food that is healthier for you and the planet.

While red meat gets the worst environmental scores, you might be surprised by the company it keeps. Here are a few of the highlights:

Also highlighted in the report are studies linking high red meat consumption to obesity, type-2 diabetes, a variety of cancers and heart disease. Other studies point to increased risk of cancer among those who consume processed meat. (The American Institute for Cancer research recommends that you not eat processed meat at all, including hot dogs and luncheon meat.)

What’s a meat eater to do with all of this information? Eat better meat and less of it. On average we consume double the amount of protein and only a fraction of the fruits and vegetables recommended by government health agencies. So there are many reasons to reduce. Look for naturally raised local meat, grass-fed beef, and organic eggs and dairy products. It’s more expensive but if you eat less overall it will be more affordable.

Posted by Bridget Oland at 2:51 PM No comments:

There is no such thing as eco-friendly or “green” fireworks 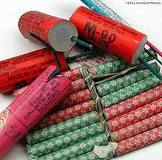 I noticed recently that one of the local grocery stores has a huge display of fireworks, a sure sign that they’re becoming much more every day when you can pick them up along with your bread and milk.

Fireworks may be pretty on a summer evening but they’re not innocuous. There are a few environmental and health issues associated with fireworks that everyone should be aware of before they set them off in the back yard with friends and family, and especially with children around.

The explosive compounds used in fireworks, the heavy metals used for colour effects, the smoke and particulate matter released when they explode and all of the packaging and debris left behind once they have been fired off combine to create a number of worries you need to know about.

Fireworks often use perchlorates as the explosives (replace old fashioned gunpowder), a family of chemicals known to cause thyroid issues, although there is no research pointing to the concentrations in fireworks being high enough (for your average person) to cause problems. As usual, children are more vulnerable to the effects of these chemicals. Also because fireworks are often set off over water, these chemicals often work their way into our waterways.

The smoke released during a fireworks display is something else to consider, especially if you (or your neighbours) have any breathing issues. The smoke contains particulate matter that leads to a spike in poor air quality for about three hours after the fireworks are set off.

What lasts much longer, in our bodies and in the environment, are the trace heavy metals that create the spectacular colours that leave us all ohing and ahing. Copper, cadmium, barium, aluminum and strontium can all be toxic, or carcinogenic, when concentrations exceed levels that are considered safe. The more often we release these chemicals into the environment to greater the chance that we’ll exceed safe levels.

When it comes to personal health, watching an annual fireworks display likely isn’t going to cause much harm, it’s when they’re used frequently that there is reason for concern. From an environmental perspective the popularity of backyard fireworks displays is something to worry about too, for all of the reasons I just listed.

Less harmful fireworks are being developed, some at the request of Walt Disney Company. Disney is responsible for hundreds of huge fireworks displays each year that were causing problems for park neighbours living downwind. A few years ago Disney created fireworks that use compressed air instead of perchlorates to ignite so burn cleaner than the traditional sort. Other new fireworks use fewer or less toxic chemicals, no heavy metals, and some have biodegradable casings. These alternatives are also more costly so unfortunately are not likely to appear in the fireworks cabinet at the dollar store.

There is no such thing as eco-friendly or “green” fireworks so if you’re not willing to give them up altogether opt for fewer this year. We all know that a holiday weekend doesn’t need fireworks to be memorable.
Posted by Bridget Oland at 9:59 PM No comments: