Pay it forward on Earth Day 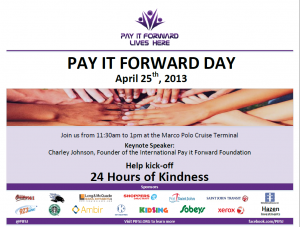 Pay it Forward Day is coming up on April 25. It’s a random-acts-of-kindness marathon where you spend 24 hours delighting people. It’s about simple gestures, that’s all. Smiles, thoughtful notes and visits, cookies for your neighbours…
The Pay it Forward movement reminds people that initiating simple acts of kindness makes everyone feel better about themselves and the world.

What if we made Earth Day more meaningful this year by adopting the Pay it Forward attitude, practiced acts of kindness towards the earth, beginning on April 22, Earth Day?

I have a friend who told me one day she looked in her grocery cart and realised that almost everything was in a box. It was a bit of a shock for her to see it all piled together, even though she was the one who put it there.
The environmental impact of processed foods goes beyond all of the packaging. Food additives used in the packaged foods industry come with their own list of concerns. From preserving agents to artificial colours and other additives, the general consensus is that processed foods are contributing to the explosion in chronic diseases.
The additives that concern environmental groups aren’t often on the government’s radar so it’s up to the average Joe to figure it out.
Take Kraft Dinner, for example.
Read more »
Posted by Bridget Oland at 9:32 PM No comments: