Are sales receipts toxic? 7 tips to reduce your BPA exposure

My son came home from school last fall with a new “5-second rule”.

When he saw me sorting receipts from my purse I was told not to touch them for more than five seconds because they’re toxic. That was the buzz at school. Like holding your breath when you drive by a graveyard and honking when you go over a bridge.
But the thing is, the receipt rule is based on fact.

It seems that the thermal paper used for most receipts these days is coated in Bisphenol-A (BPA), an environmental toxin that is a known hormone disruptor and has been linked to reproductive problems and some cancers.

Researchers are even beginning to question if there is a link between BPA and diabetes and obesity.
It’s the same chemical found in rigid plastic made from polycarbonate (some #7) that was banned from baby bottles in 2010 and was subsequently voluntarily removed from many reusable water bottles.


The receipt thing stresses me out. For the most part I can avoid canned food and #7 plastic, but receipts are everywhere.
There is no information available to let us know just how much BPA we might be absorbing through our skin each time we touch a receipt but the sheer persistence of receipts means that we’re touching them all the time.

Even though we have limited information we should still do what we can to reduce our exposure. 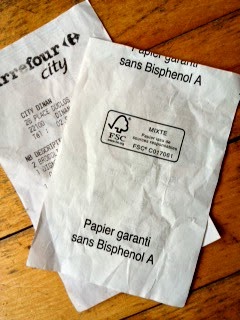 In the meantime some places in the U.S. are taking steps to ban, or at least reduce, exposure to BPA. The state of California has announced that it intends to add BPA to their list of known toxins which would mean that food producers that use BPA-lined cans or #7 plastic bottles containing BPA would have to include that information on the label. One county in New York State has banned receipts coated in BPA.
For now, it’s up to us to try to reduce our BPA exposure.
For more info visit www.rodale.com and The Queen of Green

Posted by Bridget Oland at 8:48 PM